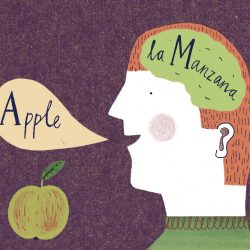 Language is inextricably tied to culture and ethnicity. Yet, sometimes the connection between them cannot be neatly summed up with a sentence like: “All Latinos speak Spanish.”

This simple statement fails to cover the complexities of the way that language evolves overtime, especially when talking about immigrants. To analyze this development in language, the United States is one of the best case studies for the Latinx community, because it provides examples of thousands if not millions of immigration stories from Latin America. Though they are all unique, these stories have helped researchers study the development of language across different generations of immigrants in broad enough patterns to illustrate the relationship between ethnicity and language.

Sociolinguists Fishman and Veltman published the first major study on the subject of changing language patterns for different generations of immigrants in the 1960s. They claimed that individuals in the second generation of an immigrant family are more inclined to bilingualism between English and the mother-tongue, but that by the third generation individuals are more likely to speak only English. My family is a perfect example of this trend. My maternal grandparents immigrated to the United States from Cuba after the 1959 Revolution, making them first generation immigrants. However, my mother and I were both born in the United States, so she is a second generation immigrant and I am a third generation immigrant. In accordance with the study, my mother and her siblings are bilingual because they spoke English at school and with their friends, and spoke Spanish at home. Yet, despite my Hispanic roots, I predominantly speak only English. In reality, I only speak Spanish at a more advanced level because of my high school and college classes. This trend is called English monolingualism, and it is perfectly aligned with the aforementioned study. So, using my own experiences as a case study, it seems that Fishman and Veltman were spot on.

However, over the years, as this field of study has developed, more researchers have begun to posit that this simple generational theory of Anglicization (meaning the process by which people begin to speak only English) might not apply to contemporary immigration waves. A study done in 2002 by the Population Association of America used a pool of Chinese, Mexican, and Cuban immigrants to see if English monolingualism was still the main trend within modern third generation immigrants. Their findings were consistent with Fishman and Veltman’s original study: in all three groups, English was the main language by the third generation. However, there were some fluctuations, and the group of researchers proposed several variables to explain deviations from this trend including: intermarriage with non-Hispanic spouse, presence of other non-English speakers at home, and location in a bicultural region.

On a surface level, I connected with all three of these variables immediately because my dad is American, I grew up with no other Spanish speakers in the house, and I moved out of Florida to the suburbs of Georgia when I was 8 years old. According to the researchers at the Population Association of America all these factors negatively impact my ability to learn and become fluent in Spanish. To delve further into these unique variables, I asked my mom, who had not read either study, to identify some of the things that made it hard for her to teach my sister and I Spanish growing up. In line with the study, she identified having no other Spanish speakers in the house and the fact that my dad spoke only English as the main deterrents to helping us develop bilingualism.

My mom also brought up another good point in her responses to my questions that neither report fully covers. As a second generation immigrant she confirmed that she spoke Spanish at home and English at school, and while her transition between the two languages was difficult at first, it was not something she viewed as a negative experience. This was largely due to the fact that growing up in Puerto Rico, her English schools had tools and experience to help Spanish speaking children transition to English. This is how she described her learning process: “It was frustrating at first but everyone at the school was understanding and helpful. I don’t recall it as a bad experience at all. Being that the school was in PR, there were a lot of kids that spoke Spanish too. I helped the American kids learn Spanish as they taught me English.” For my mom, schools that had experience handling bicultural and bilingual students were key in her developing skills in both Enlish and Spanish.

This brings up the common issue for third generation students, and immigrants in general, that schools often lack the capability to teach immigrants and the children/grandchildren of immigrants their mother-tongue. In a book provided by the University of Mexico entitled “Mi Lengua,” researchers Ysaura Bernal-Enriquez and Eduardo Hernandez Chavez explore this issue in regards to teaching Spanish. According to Bernal-Enriquez and Chavez, because Spanish is the language of a “stigmatized minority,” even people with Hispanic heritage become averse to speaking and even more so to learning their mother-tongue. In the case of New Mexico, a constitutional change in 1911 effectively banned all bilingual schools because it asserted that English must be the primary language taught. Because of this, many children who are second and third generation immigrants have had to relearn their language without proper native or heritage courses offered at schools. According to my mother, an immersive program offered in schools could have also increased our ability to learn the language, yet many schools still have some form of English only policies. It is not realistic to think that all schools could provide these types of immersive programs in Spanish let alone many of the other minority languages in the United States, but this case study is proof that it is an obstacle to bilingualism for third generation immigrants.

These studies combined with my own life experiences underscore that third generation immigrants and beyond are highly at risk of losing their ability to speak their mother tongue. While it is not the ability to speak a language that defines who you are, language is an important link to culture that cannot be replaced. According to my mom, “every culture has its own idiosyncrasies that are best understood in the native language…language also has certain idiomatic expressions that inherently carry a cultural message missed completely by just learning the language separately from cultural immersion.” Because of this, even though Spanish is made inaccessible for a number of variables, third generation immigrants must make an effort to preserve this aspect of their culture.

NOTE: The opinions expressed in this blog are the opinions of the author only. It is not to be assumed that the opinions are those of GALEO or the GALEO Latino Community Development Fund. For the official position on any issue for GALEO, please contact Jerry Gonzalez, Executive Director of GALEO at jerry@2014old.galeo.org.