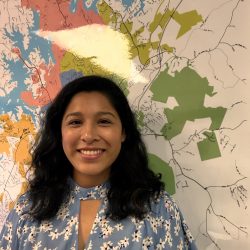 Leslie Quintanar is a rising fourth-year student at the University of Georgia double majoring in International Affairs and Political Science. A first-generation child and the first in her family to attend college, she values education and opportunity, as these were always instilled by her parents. After graduating, she wants to join Peace Corps to either work with a non-profit organization or to teach English to children. She plans to attend graduate school and eventually work in a foreign embassy or an international non-profit.

Aside from studying, Leslie has been engaged in the Latino community in the Athens area. She briefly volunteered for the Latin American Association’s Athens office where they offer immigration legal services. She mainly worked as a translator for legal documents.

Leslie’s goal at GALEO is not only to act as a voice to ensure fair and just rights for Latinos all over, she also strives to become more and more actively aware of new government policies and legislation that tend to affect Latinos in Georgia every day.